The way to a man’s heart is through his stomach. So says my Grandmother. She’s a smart woman, as well as a fantastic cook and baker. My grandparents were farmers next to the sea who raised 8 children. Aside from flour and sugar not much was bought at a grocery store. They raised their own livestock, grew their own veggies, milked their own cows and collected eggs from their own hens (both chicken and duck) each morning. Fish was always fresh from the sea. Any food they could grow on or gather from the land they did.

My Grandmother is one of those women who never uses a written recipe when she cooks (or bakes, which is amazing to be able bake well without a recipe). I’m not as skilled in the baking department but recipes tend to be more a guideline for me than a set in stone “do it exactly this way or else” set of rules. This recipe was adapted from one I found on Pinterest several years ago. The first time I followed the recipe exactly. Then I experimented and found my own version I am sharing with now. Don’t be afraid to make it your own as well.

Sometimes I keep the jalapeno whole, other times I slice them. If you don’t want to accidentally eat some I suggest you keep them whole. The dish will also be less spicy if they are left whole. I’ve used both pork ribs, beef ribs, full racks, short-ribs, and even pork tenderloin. It’s never failed. The first time I cooked these for a man he asked when I was going to cook them again. He also thanked me with a multitude of orgasms. 😉 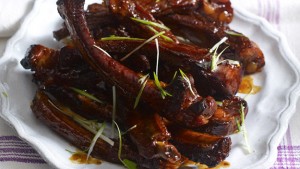 Directions
1.Combine first six ingredients in slow cooker. Add the ribs and turn to coat.
2. Cover and cook on low for 8 hours or on high for 4-5 hours. About half way through cooking turn ribs and add onion.

Serve with rice and green beans, or mashed potato and corn, or whatever tickles your fancy. I prefer a glass of Riesling or a beer.